I had a great idea my second to last year of college: move out of the dorms, move in with some friends, and save a ton of money. So I moved to an apartment, not far from campus and began to live the liberating off-campus life. I should have suspected that there would be trouble the first day I moved in, what with having to spend hours cleaning the kitchen and all. Three hours to be precise. And it was a small kitchen.
It was the first time that I had to deal with messy roommates, and it was painful. I was the only one who did dishes, straightened up the living room, and flushed the toilet. No really. I would like to say that I did so with a servant heart, but that was rarely the case. And the extensive nature of the filth gave me plenty of time to reflect on the injustice of it all. Who did these guys think they were? If ever I expressed my frustration with them, I was usually told that no one cared if it was clean or not. Thus, after all of my efforts, I was not even appreciated, adding to the frustration.
One time I resolved to make them feel it, to see how much they cared if I just left it. So, for an extended period of time I did my own dishes and no one else’s. That will show them. But it turns out that they were right: I really was the only one who cared. So, when I could not take it any longer (and we had no more dishes) I went to work once again in the kitchen. I remember feeling quite a bit of self-righteousness after cleaning the maggots from the two week old pot of spaghetti noodles, finally emptying out the sink. But then I turned around and realized I had forgotten the pots and pans that were on the stove. Hell hath no fury like…a roommate…that has to clean maggots…or however that line goes.
I have listened to my single friends’ frustration with their roommates throughout the years and realized that I am definitely not the only one. However, after 12 years of married life, I have discovered that there is another demographic that relates well to these feelings: parents. Literally, as I am writing this, I am smelling what can only be an unflushed toilet. Children are the ultimate unthankful messy roommate.
For those less experienced, allow me to give you some examples. When my kids were babies, on numerous occasions, they would scream while I changed their diapers, at 3am. As though I was selfishly keeping them awake by not wiping their bottoms fast enough. They live as though there will always be someone to come by and clean after them even in they spread poop from their diaper on the wall, or spill an entire gallon of milk on the carpet. One of Stacey’s birthdays was overall ruined as the kids fought the entire day and complained that we were not doing enough of what THEY wanted to do. If you need more help, check out Honest Toddler and you will get the idea. 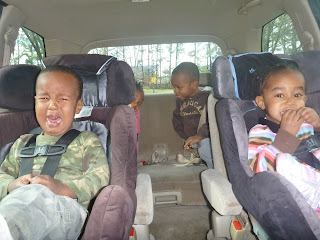 Some people live with this same struggle with their spouse. I am forever thankful to say that I do not have this frustration. But what I have come to understand is that messy roommates are the training ground for family life. The verse that comes to my mind is Ephesians 5:25, “Husbands love your wives as Christ loved the church and gave himself up for her.” God calls husbands to love their wives as sacrificially as the foot washing, patient teaching, life sacrificing Savior, Jesus Christ. Take note: the image that God has chosen for how a husband is to love his family is that of a single man. A man who poured his own life out for people who demanded miracles just because they were hungry, denied him, and left him to die on the cross alone for their sins.
The one thing that I cannot do is change how I reacted to by messy roommates. But if I could, I would go back and practice patience and self-sacrifice with them. I would seek to love them while washing away maggots and flushing fetid toilets. Of the sins that I struggle with today, the one that I so regularly repent of is a lack of patience with my children. I know without a doubt that, had I taken the time to learn this lesson better in my single years, I would be a better father.
If you are single, and hoping/planning to one day be married, I am calling you to practice this now. In fact, I would even call you to seek out a messy roommate. Crazy idea? I am reading a book on parenting by Gary Thomas where he tells an interesting story:

An ancient story tells of a monastery with a very difficult monk – a contentious, obnoxious, arrogant, and divisive man. If an argument erupted, odds were very good that he was somehow involved. Any group of murmuring brothers almost certainly had his name on their lips. This monk had no friends but many enemies, and finally even he grew tired of the animosity and left the order. While the brothers rejoiced, the abbot quickly realized his loss. He pursued the contentious monk and tried to persuade him to return. When the monk asked why he should come back to a place where clearly he wasn’t wanted, the abbot offered to pay him a salary if he would just rejoin the monastery. Imagine the other monks’ consternation when they say this hapless fellow walk back into the compound! When they discovered he would receive a salary to live their, they grew furious. One marched over to the abbot’s office to ask for an explanation. The wise abbot responded, “This brother, as troublesome as he may be, nevertheless teaches you patience, kindness, and compassion; that is why we need him here. No one else can teach you the lessons he teaches” (Sacred Parenting, chapter 9).

Though I have to say I do not really like the idea, I think this abbot was onto something. When we are single we are able to do a pretty fair job of choosing who we spend time with. Some would read my experiences here and say they are going to be even more careful in vetting a future roommate, or even chose to live alone. But I think if you do that, you miss out on an opportunity to serve like Jesus. Marriage for some, and parenting for all, forces us to serve those that are hard to serve. While you are still single, you can miss these lessons. If you instead seek to love the unlovely, serve the ungrateful, and do it with a heart of service, you will be more prepared for family life. And more importantly, you will be more like Jesus.