We figured that we would write a blog on some of the funny / quirky things that go on in our home that seem normal to us but really may not be quite all that normal…
Kaden
Kaden is an extremely normal and wonderful child. We are able to reason with him, explain our reasons for the decisions that we make as parents, and even talk to him almost like a peer. He is always asking about how we are doing and has also assumed the big brother role with all of his heart. He is often reminding the others to say “Yes mom” and to not hurt the baby chicks running through our yard.
He is also very tenderhearted. One day he was talking in an unkind tone to his sister, telling her to get out of his room. I told him to come into my room and talked to him in the same kind of tone that he used when talking to his sister (as a teaching lesson). That boy sat on my lap crying for like 5 minutes because I raised my voice at him. He also cries every time he goes to school (once a week) because he is afraid of the big kids who will take his snack and because he does not want to leave his “mommy.” However, he never complains and always comes home happy. He also loves playing soccer and playing in the rain with the neighborhood kids and makes friends easily.
Elias
The Lord has given Elias an extremely sharp mind. He is definitely an “intellectual” as opposed to someone who likes to play soccer with the neighborhood kids. He talks without ceasing, and is always extremely excited about what he is learning. He is extremely forgiving and never holds grudges.
He can be, however, very difficult and we would appreciate your prayers. Discipline and correction seem to do little for him and he often challenges authority. At school, his teachers even told him that if he (continued?) to write on the walls, they would send in the Nigerian terrorist group in to kidnap him. We reassured him that they were lying but did tell him to stop coloring on the walls. 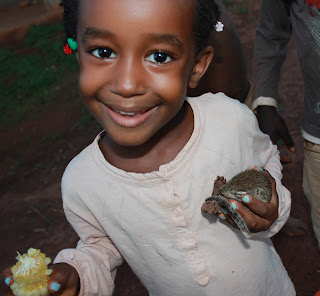 Zoey
Speaking of excitement, Zoey continues to be our firecracker of energy. She gets “detention” (where she has to write out over and over the verse Proverbs 13:3 “Whoever guards his mouth preserves his life; he who opens wide his lips comes to ruin“) almost every day because she will not stop talking during homeschool. She excitedly tells me about the little girl friends that she is making at school and is often found picking up cute little animals and loving them. She is very cute and brings much joy to our home.

This is our one calm child (and our one child that we need to try to “draw out” and teach how to communicate well). She is very imaginative and LOVES to draw and write for hours. She often colors me beautiful pictures and is starting to imagine and write out her own stories. She will “study” her Bible for hours which means she writes out the words that she sees on the page. She is a sweetheart but often has a hard time being aware of what’s going on in her heart and how to express her feelings.
I would say that an overall “feel” in our home is one of energy. We are CONSTANTLY on the kids about not interrupting because each of them is so filled with sheer excitement about…well everything. We are really really thankful that they are so happy here and so excited about life. Our prayer, however, is that they will consider what others have to say as more important than what they have to say.
As I mentioned above, they are all attending a local public school once a week. We put them in school so they could work on their French and be as much a part of this culture as possible. Overall we have been a bit impressed with this (new) school – the teachers seem to teach them. But then there are still the reminders that we are not in America: the teachers often hit students for their misbehavior…on the head. And all the kids go to the bathroom all together in a field behind the school.  The kids are also having to get used to bullies, which is good for them. This stuff is becoming normal and the kids are happy there.
Dave and Stacey
Thanks to Bonnie Marcum, the gal living with us to help us with our kids, Dave and I got to go out on a « date » a couple nights ago. We went and bought fish from a woman on the side of the road and sat down to eat. We were reminiscing about how 5 years ago, when we came to Cameroon for a vision trip, we ate at a restaurant and found it to be so so foreign. Quite to the contrary, the other night, we were not surprised at all when we were not offered silverware, but instead were expected to eat with our hands. Nor was I surprised when the electricity went out and we were eating in the pitch darkness with something coughing by my feet (turns out it was just a cat coughing up a hair ball). It was also very normal to have the “fish mama” as we like to call her throw her dirty water on the (dirt) floor right by my feet, getting me wet. All of that is our new normal, without it, things would seem strange. And we like it.
For the last couple years, Dave and I will ask one another if we are learning anything / how we are doing in our walks with the Lord. And the consistent answer is “I am learning to endure.” I think this sums up well where we are at. We are not having any “mountain top” experiences during this season in our lives, but instead are just seeking to be faithful in the day in and day out minutia of language learning and in discipline and instruction of four 5/6 year olds. I don’t know if endurance can be learned in any other way than just by putting one foot in front of the other in the face of challenges. We trust that the loneliness and frustration with language and culture learning is shaping our character and helping us learn how to be content no matter the circumstances.
“Rejoice always, pray without ceasing, give thanks in all circumstances; for this is the will of God in Christ Jesus for you.”  – 1 Thessalonians 5:16-18