This is a tribute that was written by one of the members of World Team that had spent a lot of time with Shawn Kelley, who died last week. I am so glad to have known Shawn the little that I did and I thought it would be fitting to post it on our blog. Thanks Chuck for your kind words.

Words come easy when thinking about Shawn. I was his academic advisor at Philadelphia Biblical University in the late 1990s. I soon learned that behind his (at times) awkwardness lay a gem of a person. He had a serious learning disability. But he slugged it out for four years, demonstrating a level of tenacity that spoke to his persevering character. He had to work twice as hard as most students. He did not complain or play the victim. He set his mind to the task and completed his degree in five years, overcoming obstacles that few were fully aware of. I attribute much of his strength of character, especially his perseverance, to his parents. While at PBU, our relationship deepened. I had no one I trusted more to help me at the annual missions conference. I just carried around cards, noting a task. Shawn came up, asking how he could help. I gave him the task and forgot about it. He later showed up asking what else he could do, having completed that task. He was dependable, faithful, or ‘servicial,’ as we say in Spanish. He had the gift of helps.

But could Shawn ‘cut it’ overseas? Not many can serve effectively in another country. Could he learn another language? I wondered. I learned that he had lived in Brazil for 14 months and did well. My confidence grew. And he graduated. I observed that, as hard a worker as he was, he knew how to develop lasting relationships. His occasional laughter and sense of humor still echo in my ears. And the tributes to Shawn on his Facebook page show only a sampling of how many lives he touched.

I was invited to speak at his church on 2-3 occasions in Cape Cod. I knew his pastor, another former student and colleague in ministry. When I visited, I stayed at the motel the family managed. It was well run. I was impressed by how much responsibility Shawn had. We talked about the computer programs he was learning to improve how the business was run. He was already ahead of me on such skills, learning disability or not. I began to realize he had a lot of savvy and an excellent mind for business and management, of which I saw only a small part at the University. At the church, I realized they entrusted him with many responsibilities. I envied a church that had a person as diligent as Shawn who did not need to work in the spotlight. He just got the job done. And I realized he had the gift of administration and the ability to take charge. He was respected by others who saw a diligent and caring person. His overcoming spirit made him a valuable asset on a team. We stayed in touch and when Shawn was visiting friends in the Philadelphia area, we usually met for coffee. I valued our time together and looked forward to seeing him.

He never lost his passion for missions. At some point, I assumed Shawn would carry on the work of his parents, taking over management of the business. That he could do it was obvious. But God kept stirring the embers for something more. Shawn and I talked about his joining WT. I realized that he had been making plans all along, prayerfully plotting out his journey with decisions to pay off his debt. We talked about his leaving the motel business, not an easy thing since he played such a crucial role. One day his parents would want to retire. He talked that through with them. And as godly parents, also committed to following Jesus, they gave him their blessing to leave. Releasing your child to go overseas, especially to a difficult country is not easy. But it is the way of faithful disciples who themselves counted the cost and released him to do the will of God. Showing his typical tenaciousness, Shawn completed his paperwork and submitted to the rigor of the assessment of missionary candidates. We don’t pull any punches. I had no guarantee that Shawn would be accepted as a missionary appointee. I could not be his advocate; he had to demonstrate on his own that he had the ‘right stuff’ to the assessors. I did not want to push forward a valued friend only to set him up for failure if he would return home after going overseas. Shawn was accepted! He was now a colleague in WT. 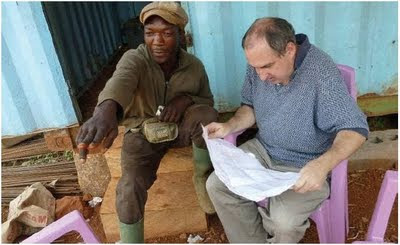 No one is invited to join WT without the unanimous consent of all assessors. This was an affirmation of Shawn’s calling. He displayed the hardiness necessary to serve as a missionary. But still harder challenges lay ahead. Trusting God for his support would be a challenge. Shawn was not strong as a public speaker. I worried about that. I need not have. Displaying his characteristic ‘stick-to-itiveness,’ he kept at it, slower than some, but never a quitter. His church stood with him, not something we always see when appointees cannot find sufficient partners. I was thrilled when I heard that he was permitted to get his tickets and do his final planning, all of which reflected his normal thoroughness. And Shawn was not just going to any field; he was invited to fulfill a key role as field administrator, a role in the background, allowing church planters and translators to fulfill their calling while he fulfilled his; dealing with details, paperwork and a myriad of ‘stuff’. Few things move quickly in Cameroon; patience is a necessary virtue, accompanied by precisely the qualities I had consistently observed in Shawn: persistence, perseverance, tenacity. He was the right man for the job. In a country where life is not easy, Shawn uniquely displayed the qualities of a mature young man who was willing to tackle life and ministry in one of the hard places.

I thank God for the privilege of knowing Shawn. I respected him very highly. How does one end a tribute to a friend and colleague, one who God in his infinite wisdom decided to take home far sooner than we expected? Shawn would want to point us to his God – to His faithfulness, His grace and mercy, His guidance and His provisions that made it possible for Shawn to be so faithful. In his typical, self-effacing humility, Shawn would probably chide me, embarrassed that I am saying too much about him and not God. He would say that he was faithful because God was faithful to Him. His Christlikeness was due to Christ in him, the hope of glory, a glory which Shawn now experiences first hand. His hope is realized; we await that reality, buoyed by the fact that we know Shawn is with Jesus, his Lord. I have no doubt, from a human perspective, that Shawn has heard, “Well done, good and faithful servant.” May God help all of us to follow Shawn’s example of faithfulness and perseverance as a follower of Jesus.

5 thoughts on “In Memory of Shawn Kelley: Student, Friend, Colleague”