We just finished up another whirlwind round of classes. The last two months have been filled with late nights, neglected emails, and hours spent pouring over Bakoum folktales and the Word of God. The Lord has once again proved faithful to help us wade through technical linguistic information, figuring out how to exegete the passage about Melchizedek and how to deal with squabbling second graders. The Lord’s faithfulness, plus all the incredible things we learned this semester causes the excitement to overshadow the fatigue. Here are a couple highlights:

Exploiting the Polygamous “god” for the Glory of JesusDave and I took a class called Discourse Analysis where we were told to take a step back from the minutiae to look at the bigger picture of the language. We looked at texts as a whole to see how they were put together. This is where we learned to distinguish between starting the Bible with “And so it was that…” vs “One upon a time…” As you can see the former formula implies that the story is true whereas the later implies that it is false. These types of formulas are important to get right.

We also learned how languages cite speech acts. Some use direct quotation (Jesus said, “I am the way”), some use indirect (Jesus said that he was the way), and some a combination of the two. If the translator does not get this right, he could end up saying he is the “way the truth and the life” instead of Jesus (true story folks!).

Also, some languages use a lot of connectors to ground their arguments (“Since therefore you have been raised with Christ…”) whereas others use the order of the propositions without connectors (i.e. if Proposition A occurs first, it is the grounds for Proposition B which comes second). 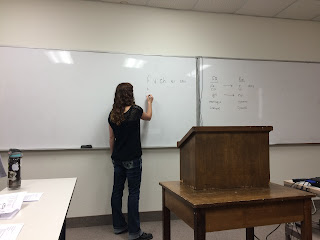 During the course of this class Dave and I meditated on a Bakoum text called “God and his wives” day-and-night for the purposes of understanding the language. We broke it into sections, compared and contrasted every verb tense, along with every connector (thus, since, and, but) and every exchange (he said, she said).

This past Saturday I spent the day looking at how the language uses pronouns (he, she, it, etc). If someone were to come up to you and ask “How do pronouns function in English?” you would probably look at them blankly. It is the same with the Bakoum. They can tell us the word for “foot” when we point to it, but they are simply not psychologically aware of things like how pronouns function in discourse. It is just like how we might not understand all the functions of our liver even though it is an integral part of our daily existence. 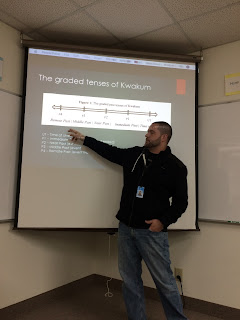 So, Dave and I were the “doctors,” so to speak, who looked at the function of pronouns in Bakoum. After weeks of staring at the language and doing research, we have a pretty good idea of how they work. The way they do pronouns is very different than how we do the in English. Now, when we translate the Bible, it will sound Bakoum. After years of being confused in conversation with our friends, we feel like we will start to understand. We are thrilled!

During the late nights of analyzing the Bakoum story “God and his wives,” I would often ask myself what good I was doing meditating on the story of a polygamous ‘god’ with a giant son of his twelfth wife referred to as ‘Pombo’. But now I know why: I was meditating on it so that I could exploit this polygamous god for the structure of the language in order to translate the story of the true God. This ‘god’ was showing me how the pronoun system worked so that it will (one day soon) be a vehicle by which the true Jesus will be preached.

Like Paul says, the ‘foolish’ ways of God (like using a story about a false god to help Christians understand a language) are wiser than our greatest missions’ strategies. “For the foolishness of God is wiser than men, and the weakness of God is stronger than men” 1 Corinthians 1:25.

The Power of the Word of God 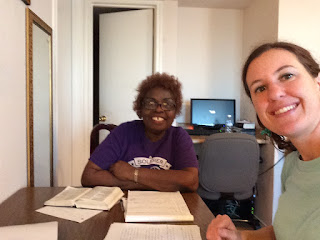 We also took another class called The Theory and Practice of Translation where we learned how to translate the Bible from A-Z. Throughout seminary and linguistics school we have learned the Greek, the Hebrew, how to write down an oral language, tone, and so on…all for this one class. It was the pinnacle of about 10 years of preparation and it did not disappoint.

Through this class, we had to translate a passage of Scripture (Matthew 8:5-13) into a foreign language that we spoke. Its funny because I’ve been in church my whole life, through Bible college and seminary, but when I was asked to translate it into a foreign language that I realized I did not understand the passage. Its like how you think you understand a theological idea or biblical truth until your kids ask you a question about it and then you realize that if you cannot articulate what you know to a little child, you really do not know it as well as you thought you did.

For this translation project, I met with three different Christian Africans (two Cameroonians and one gentleman from the Congo). It was a lot of hard work, but I think our little translation team was edified and sharpened. At one point, in response to Jesus praising the faith of a Gentile in the Scripture, one of the ladies said, “All we need is faith! This man was not part of God’s chosen Jews and yet he believed and Jesus accepted him. This is all it takes to enter into the Kingdom of God!” The power of the Word of God grew her and my own understanding of what grace it is that God accepts people for any tribe, tongue, and nation not because our heritage, but because of our faith in Christ. 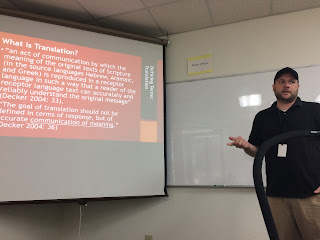 Also, for this class, my kids helped a classmate with her translation project where they spent hours discussing exegesis and translation principles with her. Kaden would come back from the library at about 9:30 at night, after working for a couple hours more wired and excited than after coming home from a party with his friends. The joy of being in the Word on such a technical level is a joy that all of us have tasted of this semester.

Through it all I kept thinking that this life’s work is far more of a privilege and honor than it is a sacrifice. I get to spend 20 hours seeking to understand one portion of one verse and then I get to communicate what I know to my Bakoum friends, showing them maps and pictures, so that they can help communicate truths into their language. There is nothing I would rather be doing.

Many courses at our school (GIAL) are taught by people who have spent the better portion of their lives on the field doing Bible translation and literacy. They say things like, “When people become believers…” They can say this because they have seen the power of the Word of God among unreached peoples. Their confidence in this power is contagious and makes me that much more excited to see Jesus be glorified among the Bakoum people.