Stacey is fast on the track of completing linguistics training. She is half way through her third session and will be done with school at the beginning of March. She is currently taking Phonology and Grammar which she could not find more exciting. There are few things that delight her soul like being handed a sheet of data from a language and being told to organize it and find patterns. Such nerdy pleasures have reaffirmed to us that she is called to be a Bible translator. And it makes me love her all the more! She really enjoys her professor Michael Boutin who has come to class twice dressed as a pirate. He also likes to point out that Stacey is one of the few students he has taught who has four children and also one of the only students who turns her assignments in early. 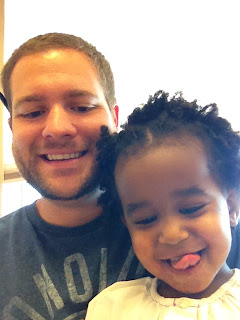 Dave prefers the term “master of the house,” though many people are calling him Mr. Mom. While Stacey is completing training he has been seeking to create order from the chaos of four toddlers. He also took an 8 week French class in Dallas on Saturdays that just ended. In an effort to maintain sanity he has instituted an 80 decibel limit to living room activities. This means that a decibel meter is setup on top of the TV cabinet and everyone is required to stay below 80 decibels. Though this may seem intense, it has allowed for enormous progress in our goal toward sanity. A generous and anonymous supporter purchased an iPad for our family. Needless to say, other than a life of service to the kingdom resulting in a Bible translation for a people group in Africa, all of Dave’s dreams have now been achieved.

Kaden is growing by leaps and bounds. We are continually having to pass his clothes and shoes onto Elias because he is too big for them. When he was younger and I used to carry him around in a Moby Wrap, I told him that one day he would be big enough and I would make him carry me around. I believe that day is approaching. He is always the cleaner and will often cry if not allowed to clean-up the dishes after a meal. The other day at the kitchen table we had this conversation:

Kaden: Hey Dad! I was talking to Makyra about a wedding. A big wedding!
Dave: Oh yeah? Do you know what a wedding is?
Kaden: A place for cake and pancakes.
Dave: Nailed it!

Kaden also loves drawing and often comes out of Sunday school with a piece of paper covered in crayon, mostly blue. Recently he must have figured out what was happening, because he has started saying, “Please don’t throw this away,” whenever he hands us his drawings. Kaden also never stops talking. Kaden has picked up all of his mom’s mannerisms and loves to stop me when reading kids’ books to let me know that he thinks the animals are cute. 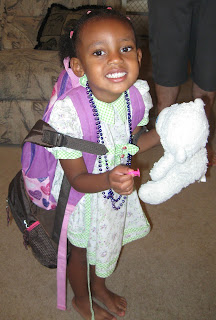 Makyra is a sweetheart, which proves that God answers prayers. She cannot stop talking about her Uncle Pat (my dad’s brother). Makyra has born witness that adopted kids are all messed up on the birds and the bees as illustrated by this recent conversation:

There is nothing in the world that Makyra loves more than her little white teddy bear! She can be found in the evenings tucking her bear into bed, giving him water to drink, and talking to him about her day’s events. 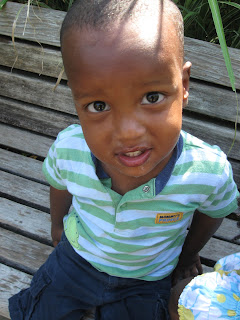 Elias successfully had his tonsils out on August 28th. Big thanks to my mom (Colleen) for coming down to help around the house during that period. It did not take Elias long to heal and we actually had to strap him in his booster seat a couple times during the first week after the surgery because he was so excited to get back to playing. Elias is maybe 70% potty trained, which sounds good, but is still a bit on the messy side. We were hoping that the tonsillectomy would be the cure to Elias’ clumsiness, however this has not been the case. It is amazing how often this little boy falls down! We have considered getting him a helmet, but are still debating on whether or not to opt for the face mask as well. Also, in an unrelated matter, we have found that children do in fact heal much faster than adults. His favorite color is green and favorite animal is the chicken. 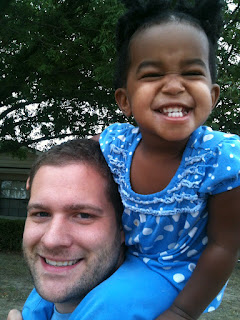 Zoey was flash-potty-trained in about two days. She does everything quickly, including eating. She is almost always the first to be done with her oatmeal in the morning in spite of the fact that she is the youngest and smallest child we have. She is afraid of airplanes, not up-close, but the ones flying thousands of feet above her. She has a super-human ability to hear these planes and is therefore often crying-afraid of them before they have even come to our attention. In addition to her fantastic-plane-spotting-ability, Zoey will always be the first to identify a flower or butterfly and make sure everyone knows where it is. Zoey is the only rival to Kaden’s talkativeness and they frequently compete for “most chatty.” As I write this Kaden is winning, but only because Zoey is drinking her milk.

3 thoughts on “General Update on the Hare Family”